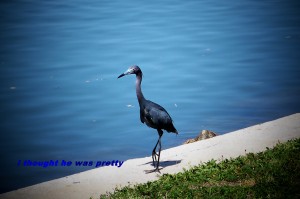 He stood in the window watching for grandpa to walk up the lane. He was getting the mail, and he told him  to wait here because the winds were causing a chill. He could see way down the lane but he didn’t see his grandpa. He saw the neighbor’s dog running across the field. He saw a bunch of geese flying over the tops of the trees. He ran to the kitchen to see what time the clock said. Ten minutes. Yeah, ten minutes grandpa had been gone. He raced back to the window knowing his grandpa was on his way now, but no grandpa. He sat down and rested his chin on both hands and waited. It seemed like he had been waiting forever. His tummy was starting to growl. He was getting hungry. He got up and looked out again. Grandpa sure was taking a long time. He walked over to the kitchen and scooted a chair up to the kitchen counter top and crawled up on the counter and got the peanut butter down. He jumped down and got the bread, a knife, opened the refrigerator door and got out his favorite grape jelly. He made himself the fattest ever peanut butter and jelly sandwich he had ever seen. Grandpa would never make it this fat! He poured himself a glass of milk and took both over to the table, and setting there in the bright sunlight, he ate his lunch. Afterwards, he wiped his mouth on his sleeve and took his glass over to the sink, and brushed the crumbs down to the floor. There, he had fixed his own lunch, and even cleaned up. He went back over to the big window he had been watching out for so long, and saw a bunch of cars with lights on top. The lights were spinning around like flying saucers in bright colors. He had to know what the excitement was all about. Maybe there was a parade and they were throwing out candy!. He got his little jacket on and his boots. He knew grandpa said to stay here because of the wind, so he made sure he put his hat and gloves on too. He walked out the door and scurried  as fast as his little legs would carry him down the lane. When he got there, his eyes got really big, then he started to cry. Grandpa, Grandpa, he wailed. He started running past all the people and just as he was getting ready to get real close, a man in a suit held out his hands and scooped him up. He held him way up in the air. The man walked around the other people asking if anyone knew who this child was. One of the neighbors walked forward and said that he recognized him. He was the four year old grandson of the man who had just been struck down. Silence fell heavy all around as people stood and stared at the officer holding the child.

The phone never rang, nor the doorbell ring. Early dawn awoke her, quiet, no breeze outside.Shuffling of slippers on the bare floor is all you heard as she went and started her coffee. She walked to her bathroom and looked at her reflection in the mirror. The years of toil and sweat were beginning to show around her eyes and at the crease of her puffy lips. She brushed her teeth and ran a comb through her tangled hair. She went to the door to peek out to see if the daily paper was there. She got dressed and walked out and got the paper. No one was around. Inside, she poured herself a cup of coffee, took her paper and sat at the table to read the local news. The only thing you heard was the clatter of her spoon and her own breathing. This was a new day, and the memories of last night hopefully would soon  bury themselves in the back of her mind of the unforgettable noisy night from before. Her ex husband had made an appearance at her door, forcing his way in, when she said,no, please go. He hadn’t liked something she had said and he intended to let her know how he felt. Now, as she sat here, in silence, reading her paper, sipping hot coffee, she heard the banging in her head, felt the pain in her lip. She heard a soft groan coming from some where within, but the phone never rang, nor the doorbell ring…..