I was trying to reach out to all of my emails. I am dragging behind, not by choice, but getting everything done for Al’s birthday has very much consumed my time this week. I am sorry, and will get back on track. I don’t mean to ignore any of you. I came to one of my comments and discovered I had been awarded these two awards by http://francineinretirement.wordpress.com/

She has an amazing blog. She is a strong Christian and takes wonderful photos. Check out her blog

There is nothing left for me to tell you about myself. you know all about me by now, so I would like to nominate some new friends I have made on here:

Thank you Francine. This means a lot to me!!!

Oh, I can tell you one thing about me. I have shopped for so many days for this birthday party, that I can actually say, I don’t want to see another store for some time! Did I say that?

Should I go, or should I stay. This was the question I kept asking myself all the late afternoon. My brother, Al, never came out of his crying mood, so I didn’t know whether we should venture out tonight, but I had promised him unless it rained we would go. It was first Friday downtown, and it was fifties night. There was a dress code of poodle skirts, but I didn’t have one, and I doubt if anyone wanted to see a an old woman with one on. I just wore my shorts. There was also a car show. My brother loves old cars, so anytime I hear of one locally, I try to take him. About an hour before it was time to leave, the power went out. I don’t know what caused it, maybe one of my baby squirrels got on a line, or maybe there was a wreck. It got warm in here, with the fans being off, and it woke Al up from his nap. This didn’t make him a happy camper, being woken up earlier than  his plan. I called the power company, and in less than an hour all was back on. No major issues of any kind, except for Al. After listening to much debate about why the power was off, I just looked at him and told him, if he could not get himself under control and try to dry the tears, we would not be able to go. He seriously did be quiet then, but the tears, he tried and tried, and they would not stop. I knew that this part was the Parkinson’s, and I wasn’t going to punish him for something he had no control over.  I had asked the new caregiver if she could go along tonight, as my helper. I decided to go ahead and take him. We found a parking spot up town not too far away from the restaurant he wanted to eat in. I got the wheel chair out, and put him safely in it. We took off on our walk to the restaurant where we were to meet the caregiver, Audrey. I didn’t make it a block, and we hit a bump head on, and it threw the wheel chair a bit, and Al got scared. I stopped and consoled him, letting him know I would never hurt him, and that I would be more careful. He seemed satisfied with this, although he hung on to both arms of the wheelchair, until we reached the business. I was a little concerned how we were going to get that wheel chair into the restaurant. I knew this  being a special day, the place would be packed. I was not to worry though. The owner knew us and he took the chair and placed it near his cooking area, allowing the caregiver and I to help hold on to Al and sitting him close to the entry door. As soon as we all sit down, his crying appears again. I didn’t know what to say or what to do. The caregiver kept chatting away with him trying to steer him into another direction. It was nice tonight, as I had no stares or remarks from other customers. He finally quit crying when his meal arrived. After leaving the restaurant, the rest of the evening was consumed by  looking at the old cars in the car show. Al spoke to everyone, sometimes reaching out to shake their hand. Some did look at him in an odd way, because they didn’t know him, but I believe they recognized his sincerity, so all shook his hands. It was rather cute, I must admit, how easy it is for him to speak to strangers. With me there, I don’t mind so much, but if he were alone, it would worry me. We were there about two hours tonight, and then a passing rain came through, and it got a bit darker, and I didn’t want him to get wet, so we decided to call it a night. All in all, I think he had fun. Here is a picture of one of the cars that Al and us looked at, and another picture of Al and the new part-time caregiver. 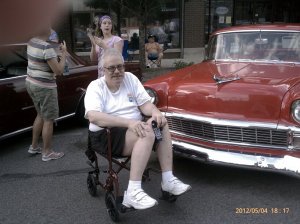 This morning brought gloomy skies, that is now in the afternoon, starting to bring a touch of blue skies. I have prayed all week for a nice day tomorrow for Al’s birthday party, and God has answered my prayer. Only a slight chance of rain. 75, perfect temperatures, and sunny skies for the most part. Al got up this morning, with a big wave to me, as if he had not seen me for years. This always tickles me how he can show the innocence from with-in himself with such a big wave of hello. He got his french toast sticks out of the freezer, and popped them in the toaster. He poured his juice and then his milk. While doing this his tremors acted out and he spilled his entire drink. He turned and looked at me the same time I looked over to see what had caused the noise. He started crying immediately. I said, don’t worry about it. I got up and walked over and began to clean the spill up that had figured out a way to make a big splash, spilling down over and into each cabinet drawer. It had splatter on the refrigerator, and made a nice wide splash on to the floor. I cleaned it up never uttering a word. I could not even if I wanted to as he was in the background, swearing at the tremors. After I got it all cleaned up, I went over to him and sat at the table with him. I explained how this was not his fault. It was the tremors. He told me if it wasn’t him, then it had to be Satan doing this. I said no, it is no ones fault. It is the tremors. I was wasting my breath, talking to the walls, because he wasn’t hearing a word I had said. He was convinced that he was a failure, that Satan was the reason for all of this. This and his tears continued all through his breakfast. I told him that even though he didn’t care for my idea, it was time to implant it into every meal and snack until the tremors lessened up. I would start pouring his drinks. Mad, oh my gosh. The independence in him flared up like dragons nostrils. I wasn’t going to take more away from him was I. He just knew that he was dying, and soon he would end up in a nursing home, a complete vegetable, not even being able to dress himself. There was no way I was going to fall into this trap. I had already cleaned up several spills this week, along with food on the floor and his chair. I was not going to keep doing this in order to keep him happy. Keeping him happy is something that I am failing at more and more. I was so thankful for the wonderful birthday yesterday, because he carried his happy smile with him all through the day, but today , all is back to his normal self. I told him, that by me pouring the drinks for him, he would not have to deal with the issues of being upset over another thing. This was one less burden he had to worry about. That didn’t work either. I am sticking to my guns though, for his sake and mine, I am pouring the drinks. When the caregiver arrived to give him his shower, we replayed the whole incident all over. The tears remained all through his shower. Even after coming out into the living room, smelling so good and looking good, the tears were still flowing. I feel like I need small buckets around the house to catch-all the puddles of tears. I just can’t get them to turn off, no matter what I try. The caregiver left, and I received a phone call from Al’s prior place of employment. He was Al’s boss the entire time he worked there. He told me he was going to drop by to wish him a happy birthday. Al will be so happy. This surely will cause huge smiles. He talks about his old job quite often, so I can’t wait for his boss to show up. Al has no idea of this. Surprise!!!!  I then went to the kitchen to prepare the foods for tomorrow. I fixed seven layer salad, pea salad, potato salad, kidney bean salad, and I made my children’s favorite dish, home-made macaroni and cheese. Tonight I will set all of the meats from the freezer into the refrigerator to start the thawing process. All done, I am now taking the time to squeeze this blog in before I start his lunch. I have twenty minutes left. I think I deserve a nap after lunch when he takes his, as tonight I am taking him and the other new part-time caregiver up town to see the car show. Busy and emotional day today. I pray to the almighty God , that tomorrow goes well, that Al is happy and smiling, and we all enjoy a day with family and friends.