A few days ago when I was overwhelmed with too much to do, I was nominated by http://hometogo232.wordpress.com/2012/05/11/one-lovely-blog-award/, for the One Lovely Blog Award. This is a beautiful award. I get so shy when someone tells me I am doing something right, and I try very hard to get over it. With this award, I have got to work harder at realizing I can do a thing or two alright. lol. I feel honored also that hometogo232, enjoys my stories. I just want to say a big Thank-You.

What can I say that you do not already know about me?

I love to take naps in the afternoon.I sleep better in the day time than at night-time.

I love listening to the frogs mating in the spring on a quiet night.

I love zoos and picnics.

When I am stressed out, I eat.

Thank you everyone for enjoying my stories, and being loving and supportive when I most need it.

Today my brother got up for breakfast, and then returned to his room, which is usually pretty common on Sunday mornings. He reads his Bible most of the morning. I stayed out here in the living room and wrote a couple of blogs and answered emails. I knew it was a double meaning today for the two of us, but I couldn’t bring myself to bring anything up for fear I would be the one this time to cause the tears to fall. I made plans for Al and I to get out of the house for lunch, so we would have a break from my cooking and also from my thoughts I had pushed back in my mind. About an hour and a half I went into Al’s room to check on him. The lights were off and he was sleeping. I found this quite odd, as this was not in his routine. I thought to myself, oh no, he is not feeling well. He heard me tip toe in and raised his head a tiny bit off of the pillow. I asked him if all was alright, and he said softly yeah. I said alright, I was just checking, since you don’t usually sleep at this time of day. He said he wanted to be left alone. Hmmm. I reminded him that we were going out for lunch today and left him alone. I went back in two other times, and he was still sleeping. I knew in my heart, something was not right. The last time I went to check, I told him it was time to get up so we could leave. He didn’t move. I gave him five more minutes and then reminded him again. He did get up this time. He looked alright, so we left. About a mile down the road, the truth finally came out from his eyes. Tears started softly falling, one eye, than the other eye following. He started to talk, but the words were so soft, I had to ask him to repeat himself. He said I miss her, and then the tears fell more quickly. I miss mom, and today is her birthday too. Oh wow, I pulled off the side of the road, and said nothing for a moment, trying to compose myself as I had known these two facts since rising this morning. Somehow, I was hoping that the dementia would be here today, but it wasn’t. I told him I missed mom too, and I knew how he was feeling inside. I touched his arm and told him I loved him, and that together we would get through this. He just shook his head up and down and kept crying. I gave  his arm a squeeze as if somehow this would make the pain go away. I stayed put for a minute, and then we left for the restaurant. I thought this distraction would help. We went to dine and the whole way through the meal, he sat in silence. All of a sudden he could do nothing. He could not pick up his silver ware, he could not open his napkin. I helped him and finally he began to eat. We left early, as I knew this had been a bad idea. When we got home, he talked about mom quite a bit, and then grew very quiet. He then said, I am going to see God, and left for his room. I am sitting here, sharp pains racing through my heart, as I knew he is grieving and so am I. Help him Lord. Pick up where I left off.

I Am But A Flower

HAPPY MOTHER’S DAY SONG TO YOU 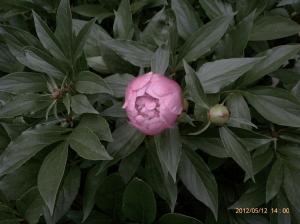 This is in my yard yesterday, and it was beginning to open. By the end of daylight, it was in full bloom.

My grandmother loved Peony bushes. Every time I see these bushes it brings wonderful memories of her loving them. I can still see her in my mind bending over to smell their perfume. This also reminds me of my own life. I came into this life innocent, as a bud on this bush. I was fed and watered daily, being taught from right and wrong. Provided much sunshine as I played outside, and nurturing from reading when the weather was over cast with rain. Showers sprinkled down on my life as I learned about numbers, and getting along with others. I was taught to listen when someone is talking, and to voice my thoughts when I was asked a question. I was taught the Bible, and that with talking to God, and reading his word, I could grow strong, as strong as the stem that is holding this delicate new life in the photo. Being able to share a part of myself with others, allowing them to know who I am and what I represent in this life allows me to be able to live in society, as do these flowers that are all of the same kind, but unique in each one, sharing their space with each other and complimenting them together to show their beauty and grace. Our time is short on earth, as is the beauty of these beautiful flowers. These flowers show their beauty with a full force, proud of who they are and standing tall for all to see. I want to be compared also to these beauties. I want people to notice that I am a child of God. I want them to see that I stand tall, with pride, and no one will question my direction I walk in my life. Soon these flowers will start the process of wilting and the delicate petals will fall to the ground, and the plant will die and go into hiding until the next season. Myself, will also wilt from age, and my years will show, and I will also start the process of dying. I will be like these flowers, preparing myself for another season, to walk with my God, making my ways up the stairway to heaven.

I like big butts and I cannot lie (Photo credit: J. Star)

I fall asleep to the TV each night, and this morning I woke early to hearing the word butt over and over. As my mind was waking up and hearing this word, I started to wonder what station I may have flipped the TV to during the night, as I Love Lucy is usually who wishes me a good morning each day. I sat up on the edge of my bed and lit my first cigarette and stared at the screen. Yup, I was right, I was hearing about the butt. I have never been a skinny girl. I weighed seven pounds even when I was born. Height was never my friend when I started reaching womanhood.My tallest I ever reached was five foot three, add this to a non skinny body, and you end up with an all trunk body and small legs. Can you picture this? People used to compliment me the most on my small legs. I was called bird legs for many years. Now I can see why. The trunk made the legs look smaller. A magical allusion to the eyes. I also was complimented on my butt. Not a big one, always hearing that I had a flat butt. I clung to these two compliments all of my life until this morning. I was never one who made exercise programs a habit of nature. I ignored those parts of the commercials on the television. Now I find out that I have three muscles in my butt. The minimum, the middle, and the maximus. I never knew this! My butt was and is flat, not as a compliment, not because I do not each much, but because I do not exercise those three muscles. I learned that I could have a high, nice rounded, butt, if I only spent the dollars out on this DVD, that taught me how to have this beautiful shaped butt that all men love to look at and all women desire. I was so disappointed that the compliment balloon had busted! Now I was down to only one compliment, the legs. My legs are thinner, because of my shape, plus the fact, I have always loved to walk. Firming them up and allowing the muscles to shape them. I quickly took an over haul in my mind of how I could  FIX this new problem. I came to the conclusion that I was going to have to accept this for what it was. I am fifty-eight years old. I do not want to lie on the floor and roll around and have to do this for sixty to ninety days. I can not get out and walk like I used to because of caring for my brother. This all made me tired and I almost crawled back underneath the covers to sleep it off. Then I decided to just forget it. God gave me what I have. If I had the beautiful butt, it may change my personality to someone else. I could even turn into a snob, walking around with my nose in the air, realizing that I had the BUTT, everyone wanted. I flipped off the TV and came out into the room. On the baby monitor, I could hear my brother dreaming. He was laughing. Was he laughing at me? Did  he pick up on that infomercial, and he also knew I had a flat butt? I laugh at myself as I think this crazy thought, and instead wish myself a happy mother’s day, and go start my coffee.