god is good, kind, merciful and loving. prayers to all in Colorado

“So, you still believe in a merciful God?”  Some of the comments online are genuinely inquisitive, others are contemptuous in nature. Regardless of the motive behind the question, I will respond the same way.

Yes, I do indeed.

Let’s get something straight: the theater shooting was an evil, horrendous act done by a man controlled by evil.  God did not take a gun and pull the trigger in a crowded theater. He didn’t even suggest it. A man did.

In His sovereignty, God made man in His image with the ability to choose good and evil.

I was there in theater 9 at midnight, straining to make out the words and trying to figure out the story line as The Dark NightRises began. I’m not a big movie-goer. The HH and I prefer to watch movies in the comfort…

A dear friend of mine here in WordPress has a son who wanted to share some of his very own collection with my brother, Al. Nothing brings a smile to my brother quicker than coca-cola.

I was informed that this package was going to be mailed out, and I was so excited for Al to receive it, and it was very hard for me to keep my big mouth shut, and not give it away, that he was going to receive a box in the mail for his very own.

Today it arrived. It had been a bad day, as we are starting to have problems with yet a new situation. I won’t go into details, because I don’t want anyone to get squeamish or end up having to run to their bathroom, but it does have to deal with bathroom duties, so we are now trying to figure out better ways to make life easier for him and for me.

So after supper is over, and he is sitting in the living room on the couch, he tunes in on THE BOX. I am noticing but saying nothing, giggling inside, as I can see his brain ticking, wondering who’s it is.

I am the worst at holding back smiles for others, so I had to say, IT’S FOR YOU! I never saw it coming. He started crying. I asked him why the tears bud? He says he is scared to open it because it could be bad, as it wasn’t his birthday. I said, I think people can be nice and do things for you without reason. I explained how I have come to know this very nice lady, and her son wanted you to have something to add to your collection. He still cried. I placed the box over by me, and told him when he was ready, he could open it.

I waited about ten minutes then looked around to him, and he was lying down to watch TV. I must admit, I don’t understand the brain, nor do I understand the intimate details of this wicked Parkinson’s, but he just didn’t get the connection of any of it.

This past week or two, Al has shown much confusion in comprehension. I understand this is a big part of the Parkinson’s. He stares instead of speaking, and when he looks at me, I can see by the blank eyes, there is no one there for a few minutes.

I couldn’t take it. I cursed the disease, and plastered a smile on my face, grabbed a knife, and cut all the tape so he could open it easily. I placed the box in front of him, and said please open it bud, you are going to love it!

It took him forty-five minutes to take the items out of the box, not because he didn’t want to, but I could actually see the slow-timing in his body. The arm reaches for the paper packaging, used to protect the items, and he grabs one by one, with his hand. He lays the empty bag beside him on the couch. I counted by seconds, and it took his hand twenty seconds to release the paper from  his fingers. My heart broke, as I knew he was trying so hard to keep moving, but the brain was not co-operating.

There is one thing my brother knows, and that is each piece of his collection. He knows when he got it, where he got it, how much he paid for it, and how many he has. As he was taking the goodies out of the box, I would ask him if he liked it, or had one like it or anything generally I could think of in order to get some look of excitement from him. To my despair, he told me he didn’t know if he had this collection piece or not. There were no smiles ever from this, but I do know that he liked it by his signals at the end. He took each piece and went to his room, and I can bet right now he is in there comparing them to his pieces, looking at every detail, and using his book to look at the originals.

Thank goodness he did this. If he would have let the gifts set, I would have known he truly wasn’t here with me tonight. I probably won’t see him again until snack time. This will keep him pretty busy, and help him to not think upon himself.

I want to thank-you dear friend for allowing Al to have an evening to enjoy himself. He may not have actually shown it like we do with awes and wow’s and smiles, but I know that he at least still has the ability to feel from within, and connect in his own ways to his coca cola. 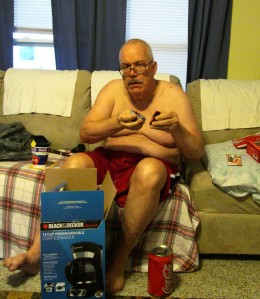 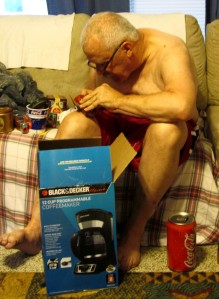 It Scares The Hell Out Of Me!

I don’t mind using the term, it scares the hell out of me. I sit with my mouth opened, watching the noon news, and observing the words and video of the shooting at the movie theater in Colorado. The random shooting was during the movie Batman.

This is not a preach blog, but an eye opener to all of us who wonder about our futures. It doesn’t matter to me what religion you practice, or how many times you pray or even if you go to church or not.

What concerns me, is what I know, and don’t say, as a tiny dot on this enormous earth. My beliefs that I personally try to follow, living day-to-day lives. I see devastation everywhere. Messes that can not seemed to be cleaned up. People seeming to do crazy things to harm others.

We are in trouble in my opinion. The only way out is to accept Jesus Christ, and make him your most important thought, every single day. To be able to escape this world and get my soul into heaven where I will see no more tears, anguish, and sorrow, is a plus in my eyes.

In my thoughts, I see the more we take God out of the world, the more the devil is welcome. He can sneak into any crack, left open. He can come into our own families, our work, our streets. He will use any means, and all of his power, to change your thinking. He can lure you into thinking that you are doing something that will be alright and you will not be held responsible for any actions.

I have seen news media where Americans do not place their hand over the heart, when saying the pledge of allegiance. I have seen schools taking away the privilege of saying prayers in school.

Groceries are out of this world in prices. Families finding themselves wondering how they are going to feed their children. Jobs are being taken away or lost if you voice your opinions in the wrong tone. Apartments and homes being rented for a price so high, because of high taxes and or greed.

When are we going to stop and hold hands and stand together for what is fair and right? Can we go back in time to when a hand shake finalized a deal? Where trust is formed out of words and not sealed on a paper? Can we unlock our cars at night or leave our houses unlocked during the day hours?

Killings going on all over for no good reasons. Sickness coming back rapid, that was once thought to be ended. Countries mad at each other, wars constantly being fought, and does anyone really know the reasons why it was started in the beginning?

It scares the hell out of me to see this beautiful planet we live on, being put through turmoil. God says to love one another, clothe your neighbors back as you would your own. Treat your neighbor as you want to also be treated.

We need to spread the word of God even faster than we have done in the past. We need to let everyone know, that we need God to be taken seriously once again, before we are lifted off of this earth.  I want to know what is going to happen to me when my body lies lifeless in the ground. I do not want any questions to enter my mind on my death-bed, about where I am going.

Lord help us all, let us see your arms reaching out to us. Let us believe that you are the only way, and that all other ways are false. Keep me safe in your arms Lord, never leave my side. Help me to be a witness to others who have never heard your name. Please give me the ability to be there for others in needs, but to also be able to recognize false prophets in disguise. Amen.

Once upon a time, there was a girl who thought

That all what  was said were  true

She loved, she trusted, she gave her all

And ended up totally blue.

Every day she begged for food

And worried where she would stay

She spent her days so full of tears

Realizing she should have walked away.

Because of that one day she fell

To her knees and cried to God

Help me to walk only on your sod.

Because she sounded so sincere

God lifted her from her pain

He fed and clothed her and gave her hope

And turned off the clouds of rain.

Until finally with a guiding hand

She landed on her feet

She gave her thanks to him each day

By spreading his name all over  the streets.

Thank you, Kellie for the chance to write for you exercise prompt.

wicked witch of the east, death

I Hate You Devil!