I had taken two days off from seeing Al, and so today, I was going out there. I am having problems and I don’t know what my problem is. I have thought of all kinds of reasons it must be, but have not come up with the right answer yet. Maybe you see something I do not see.

I have taken care of my brother for about five years, and it was never easy, but the love I have for my brother, and the support from all of you have helped me to continue through the months.

Then it got to be more for me than I could handle, physically and emotionally. The falls, the lack of comprehension, the Parkinson’s Disease in itself, takes a toll on the whole body, mind and soul. As my friend Jo, over at Camsgranny says, it is ugly and rears its head when ever it can.

Now, he has been placed going on almost two weeks, and I feel like I am in mourning. I can’t get excited about Thanksgiving or Christmas. I forced myself after I saw Al today to go to the grocery store and buy the needed items for the Thanksgiving feast.

I mope without wanting to, I actually cry now, because he is not here. I feel like I have lost another member of my family, and actually, I have not. So why in the world do I get all stressed when I go to see him, since I miss him so much? I got in my car, and as it was warming up, I could feel my body starting to tense up, and my breathing getting shorter in breaths. I don’t get it.

I walked in to the facility and went straight to his room, but there was no one there, so I came back out into the hall and heard B1. Oh, now I know where he is! He is playing Bingo! I walked down there and instantly picked him out among the crowd. He was intensely trying to win, although he had already won three times!

I pulled his walker over to him and sat down on the seat and watched everyone play and I stayed quiet, not wanting to cause a commotion that may keep them from seeing a number and yelling out Bingo!

I did not wait very long, and Al looked at me with a smile, and said, What’s up, and I said just here to see and visit with you bud. He didn’t say anything else until Bingo was over and then he let me know all of his problems.

We sat there for a while talking as everyone else had disappeared from the social room. He told me he is seeing double, and that his vision is blurry. This is the second time he has complained about it. Part of me wondered if his vision was double, how could he play bingo, but if you know Al, he will suffer through anything to be around other people. I also wondered if it is his new bifocals strength in his glasses,was the culprit, but since this is the second time he has complained, I went to the office and stated my concerns. Now they are going to schedule another appointment with an eye doctor, to gain a second opinion. I will be glad when this is done, then I will know what is hiding behind those glasses.

He complained of ankle and leg pain, so I checked his ankles and they were filled with fluids. I could see my finger prints in his skin from where I had squeezed lightly. That stupid PD is going straight for his heart. I would just like to rid my brother of this disease. I want to be able to reverse everything this illness has taken a way from him.

He finally got up and started to walk, but I could see his knees buckling and his tremors were quite lively. He walked about twenty feet and said his feet were throbbing, so we sat for a bit, and then he got back up and walked to the therapy room. Evidently from what I have heard, he wanders in there periodically to see if they can help him remove some pain.

Today, the therapist sat him down and put this infrared heat on his knees. She said it penetrated way down deep inside. Each knee took fifteen minutes, so we all started talking about Thanksgiving, and I was telling Al when I would be there to pick him up that day, and then he started crying.

I am not speaking of big bad crying, I am talking soft gentle tears that could not be restrained. The therapist asked him what was wrong, and Al said he hated the holidays. He said that they were not the same as when Mom and Dad were here, and believe me, I knew what he was talking about, as I feel it every year about this time too.

He continued to cry and the therapist and I tried to change the topic, but Al’s mind gets stuck like a record on one song, and it is very hard to change the music. My heart was breaking, and the more he cried, my heart broke into several pieces.

At that moment, I hated life, I hated Parkinson’s Disease, I hated his heart being damaged,  his eyes being affected, and his ankles being swollen. To myself, I pleaded with Mom and Dad to come back just one more time. Do it for Al, do it for me, we miss you so bad.

Without knowing it the therapist brought me over a couple of kleenex and I said what, and she said wipe your face. I touched the kleenex to my cheeks and when I looked at it, it was soaked with tears.

Thank goodness it was noon, as it was time for Al to eat. I walked him down to the lunch room and made sure he was sitting properly on the seat, and then I told him I needed to go get groceries, and get home to let Polly out. He looked at me with his teary eyes, and asked him if I would come back tomorrow, and I said of course, you are my baby brother.

Daily Prompt: Set It To Rights/ The Daily Post

Think of a time you let something slide, only for it to eat away at you later. Tell us how you’d fix it today.

My mother that raised me was my step-mother. She started raising me when I was five years old. I don’t remember too much about those years with her, although I remember many good times with my grandpa. 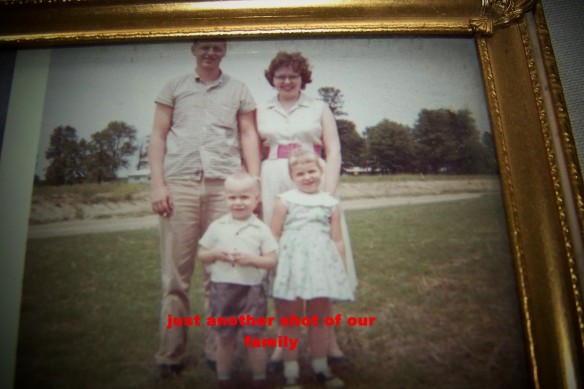 My mom walked into a ready-made family when she married my dad, and I don’t remember anything bad about our relationship, until my sister was born. I am sure I was jealous, and I made her life harder, than it should have been.

I never went out of my way to bond with her. I only saw her paying more attention to my dad and that new baby. There were many times that we got a long fine, and there were plenty of times when I could have been a better daughter.

When I finally grew up, we were closer because I was not such a brat, but still, the bonding was never there. I remember a few times it was mom, that was there when I was in trouble, and mom that understood my tears.

As I got older and older, I realized how ungrateful I was to her, and it bugged me that she had reached out to me for so many years, and I had not reached back. After a few more years went by, I came to know God much better than I had in the past,and I made up my mind that I was going to confess to mom my feelings, and how it was never her fault for our relationship fall outs, that it was mine.

When I told her she cried, and told me she loved me as well as she could. This hurt me bad, but I had it coming. I had never given her a chance. For the next two years, I worked hard at our relationship. I spent many more moments with her. I shared my own life with her, and I opened up quite a bit.

I am  forever grateful to God for helping me see my errors, because he knew my future. He knew that in those two years that I made great efforts getting to know my mom, was going to be a life changing experience for me.

One day at the end of that two-year period, my mother fell ill suddenly. I got the phone call while I was at my job, and I left immediately, and arriving at the hospital, I could tell that something was seriously wrong. Things did not look good.

My mother knew or sensed it too somewhere in her mind, because when she saw me, even though she was acting out of character, she started patting me on the shoulder over and over. I felt at that moment, that precise moment, she was forgiving me and hugging me like a little girl. She was telling me that it was alright, that she loved me. Right there I was so thankful that I had let go of my pride and had reached out to her, because seven days later, she passed away.

I have never once regretted making the choice I did. God knows our life, and he knows our future. He knew that I would never be able to live with myself, if I didn’t make things right. God is amazing, and he is real. There are many times I could sit here and write about events that happened due to God being by my side, but this particular time, sticks out more than any other, when I put my childish pride and jealousy aside and grew up, and appreciated what I had before it was too late.