I Saw This In my Mailbox 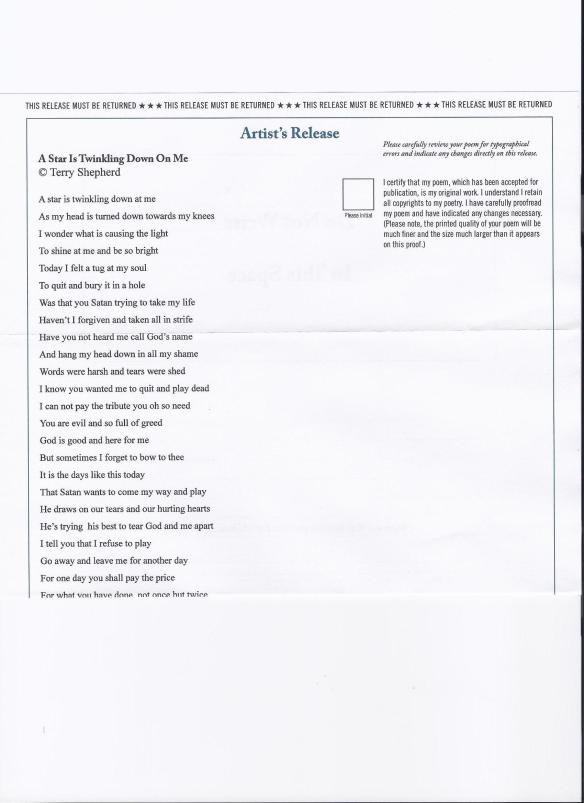 I entered a poetry contest, that a good friend told me about. I received a reply today. The company was asking for no money. They just want me to proofread it and initial for any changes.

This time I am excited, as I don’t feel this is a scam. Recommended and no money required. Just a letter letting me know they liked it, and wanting me to initial and send back. This is the poem that I wrote.

If this is by chance a scam, at least I have paid nothing.

STILLNESSHe was young when he met her. Their eyes met, and it was love at first sight. They spent every moment available to them being together, holding, touching, kissing, going as far as they dare go. No one said a word to let them know they were treading dangerous grounds. No one warned them to keep a distance. All summer long they went swimming, picnicing, exploring what life had to offer and each other. At years end the enivetible thing happened. She became pregnant. The fear rose in her voice as she stuttered the news to him. What were they going to do? What would they say? Now the parents stepped up. Shaming them, telling them how bad they were. Both were kicked out of the comfort of their homes. Forced to try to figure out how to survive. He got a dime store job that paid little. She went on the system to help her eat. They lived in an ally apartment. He was scared. Sorry he had ever done this to himself, not thinking of her. One day while she was at the doctor, he packed his few belongings and snuck off leaving her with nothing, the same as he gave her when he entered her life. She came home to tell him the baby would arrive within the next 24 hours. She heard silence, saw nothing. She knew he was gone. During the night, the pain was horrific. She got her coat on and went out into the darkness. She tried to walk to the neighbors house to ask for help. Please help me with this pain……….She never made it. She gave birth right there on the grass under the huge oak tree. The cord was wrapped, the color was blue, there was no sound. Silence and chill stayed with her forever more…………terry shepherd

Now that you’ve got some blogging experience under your belt, re-write your very first post.

The above post is the very first one I placed on WordPress. Now, with a few months under my belt, here is my redo of it.

The two eyes locked on to each other. It was a sexual lust, needing to be acted upon. Each time their eyes met, the feelings would return. Donna and Ted  could hold out no longer and with agreement written all over their foreheads, they walked to his car.

They didn’t care that they were out in public. The windows became steamed as he tore at her clothes, lifting her dress. He explored her secret garden. He took her hand and placed it to where his own excitement was growing. Within minutes, the act had been performed and ended.

At every opportunity, this random act of desire was played out. Parents didn’t seem to care. No one asked what each of them did with their summertime hours. The two found themselves sharing the waters, having picnics on blankets, and being in each others arms.

The time did arrive that a change was noticed. Vomiting in the mornings, swollen breasts, and a visit to the family doctor, did prove that she was pregnant. The hardest thing to do now was to explain to their parents what they had been doing all summer.

Donna said to her parents,” Mom, dad, I am pregnant. I didn’t mean it to happen. I swear it was an accident”! Her parents ridiculed her with words being said,” How could you be so stupid? You knew better to let this happen. We aren’t going to have someone like you living here in our house. Now get your clothes and get out”!

When Ted went to his parents and told them, their reply was, ” Stupid, just plain stupid! You made your bed, now you lie in it. Don’t expect us to bail you out of this. You better get yourself a job and a place to live. Now get out of our faces”!

Donna had Ted drive her to the welfare department. She walked in with her head hanging low. She was embarrassed and ashamed. She had no choice, she had to go on the system, in order to survive.

Ted found himself a job. It was a low paying job that would give nothing more than basic needs. Through the help of friends, they were able to move into a small apartment. Not only was it tiny, the entry door was in the back of a dark alley.

They needed no furnishings but what they could carry with them. The box apartment was furnished with basic furniture. The two lived under the same roof, but the excitement of what they had shared the past two months had vanished. Ted went to work, Donna stayed home. She had no education and with being pregnant, the options were almost zero for her obtaining work.

They lived with the routine of work, home, eat and sleep for several months. Donna kept her appointments with her baby doctor, and then the time came for the baby to be born. She raced home to tell Ted that the baby could be born within the next day or two.

When she opened the door, she walked into silence. She called out his name, but only heard echos bouncing from the walls. She walked into his bedroom, seeing nothing. She began to cry. Her gut told her something was wrong. She stood there looking around.

Where was he? I can’t do this alone? Please don’t leave at a time like this. Suddenly, an idea sparked and she walked over to the closet, and found her proof. The clothes that had hung there were gone. His dresser drawers were empty.

She walked over to their bed and threw herself on it. Tears began to fall and soon sobbing could be heard. All of the emotions she was feeling, caused pains to begin in her stomach. She sat up and felt her tummy. It was hard and it hurt. She began to shiver from fear. She could not do this. She wished that she would have never met Ted. She wished that she would never have climbed into the back seat of his car.

The pains became severe quickly. What am I going to do? Who is going to help me? I am so scared. I want my mommy. These thoughts raced around inside of her head, until she had a very sharp pain. She stood up and her water broke. She was not familiar with this and she grabbed her coat and walked out into the darkness of the alley to find help.

She looked around and recognized no neighbors. She needed help, so she began to walk. Within moments the biggest pain she had felt, forced her to the ground. With no love or support, her baby was born.

She heard nothing. There were no cries coming from the newborn. She sat up and looked between her legs, and saw the blue face of the child. A cord was wrapped around the precious baby’s neck. The little girls eyes were closed. There was no movement in the lungs. She reached down and touched the baby.  All around her was silence. Quietness took over her mind and the baby’s tiny soul.

She laid back down and wept. She was weeping for the loss of her summer, Ted, and having no home, and now this, the death of her baby girl. Her life was over, there was nothing left for her. She laid there for what seemed hours, and then a soft blanket wrapped gently around her, and a warm hand comforted her. Soft words were spoken, and Donna saw a glimmer of light. 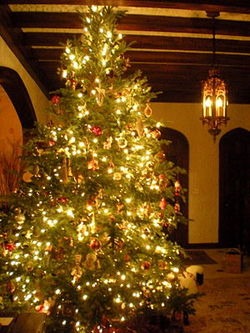