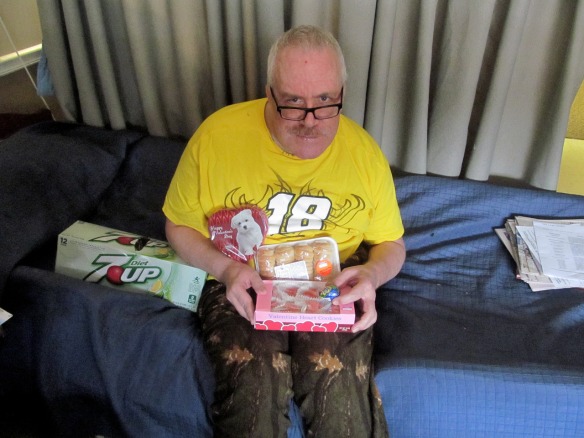 I am not bitching ; I am just wondering.

Today when I went out I had to go to the bank and have some papers noterized. Now I have gone to this bank for over fifteen years. Everyone in there knows me. There was one new girl working today. She could have been a fill in or maybe a new employee. It didn’t matter.

She gave me a hard time. My bank account number was not good enough. All the information I gave her verbally she could verify through her computer. She called over two other tellers and ask them if they recognized me. One said yes and the other said no.

I looked her in the eye and said, “how can you say this? You wait on me all the time. You and I set up accounts for my brother here”. She played dumb. I don’t know what was going on behind the counter at the bank today, but I didn’t want to be a part of it. After words were exchanged for several minutes, I finally got my way and left without saying goodbye.

The second incident happened when I was leaving the grocery store parking lot. I saw a cart to the side of my car. I checked to see how close it was to my car door. I know I should have taken it back to the cart storage area but it was windy and I just didn’t want to have my lungs have that much chilly air plus the winds so I left it sitting where it was.

I got in my car and a fancy white car pulled up in the same area I was only two car spots down. I started my car as the forty-year something guy got out of his car. He walked over to the cart that was by me and he swung it around in full circle.

He was not paying attention to my car or maybe he really was. He came so close to taking off the paint on my car that I actually ducked my head with my hands. It made me very nervous. He looked at me and mouthed something at me that didn’t look very nice. I swear I didn’t do anything. He must have been having a bad morning and decided to take it out on anyone near him.

What makes people lose the respect for other humans? If I would have acted like that with my mother around she would have reprimanded me so bad. What is the saying? Treat others as you would have others treat you?

This is not the only time I have observed such things in public. It always makes me wonder what goes on behind closed doors at home. I have seen kids running through the grocery store knocking things off of shelves while a parent is talking on a cell phone.

I have seen parents slap a kid right across the face in front of me. I have even seen couples arguing in public and have heard some pretty choice words being exchanged. I think it is so pathetic.

What has happened to society? Where did the rules change about public behavior? Family morals? Child abuse? I don’t understand anymore. Can I fix it? Definitely not alone, and I don’t even know if it can be fixed in group settings.

A lot goes on today that I do not approve of. The ones I see the most are the children. I have seen people stealing in stores. I have seen too many naked butts from guys wearing their jeans too low.

Oh believe me there have been times when I would be considered a tattle tale. If I think a child is in danger I will report it to a store manager. I have even reported teen guys with pants at the knees. I don’t want to see their butts or their boxers. To me this is a big turn off.

What about women and young ladies that have to show all of their cleavage or women who brag about the size of their chests. Who cares? Who really wants to know? There is so many more important things in life to be concerned with than  body size, at least in my opinion.

If things don’t change and some morals brought back into our lives I hate to see what will happen to our young grandchildren. How will they act? How will they treat their mates? Will they respect their parents or grandparents?

I don’t know the answers but I can say truthfully that I am so glad I am the age I am. I am all for having fun in life. Laughter is the best medicine of all. But when you degrade yourself as a person or a mate or a parent, you have crossed the line.

I hope the gentleman that swung the cart is in a better mood tonight. I hope that whatever was going on at the bank this morning was resolved. Life is good, let’s keep it this way.

Being Valentine’s Day I decided to give Al, my brother a few goodies. I stopped at the grocery store and picked up these items for him. I bought myself a Cadbury egg also. I just had to do something to spoil me also.

When I arrived at his facility he was napping. I hated to do it but I woke him up letting him know I was there. He looked at me and gave me that famous smile of his. Eventually he sat up with my help and looked at his gifts. He was more excited about the creme horns than the candy. I knew he would be. It is his favorite junk food. I got him some diet soda as he has been drinking so much diet coke. It is hard on his stomach ulcers drinking too much dark pop.

I bought him some heart-shaped sugar cookies with red sugar sprinkles on top. I bought him a Cadbury egg also and his box of candy. He seemed happy with it. He laid back down and we watched television together.

When it was time to get up for lunch  I saw he had his shirt on backwards so together we changed it. I walked with him down to the dining room. I learned today that for $3.50 I could purchase a meal. I asked Al if he wanted me to dine with him and he said that would be fine. He normally is the only one sitting at his table. This upsets me because he is such a social person.

After we both ordered I observed that every CNA and nurse or any staff that went by he said hi to them. There were a few that didn’t say anything but most of them did respond back to him with a comment. I explained to Al that his voice is so soft that the others could not hear him. I do believe this is the truth too. Al’s voice is very soft.

We each had chicken for lunch. Al had scalloped potatoes and green beans with vanilla ice-cream. I cheated because of the day and I had a baked potato half, butternut squash and a piece of cherry pie with coffee.

Al was definitely struggling today. I just can’t seem to get anything to work with getting those cups to his lips and then being able to tip them enough more to get the liquid in his mouth. I talked to the dietary supervisor and she suggested weighted cups. She was going to dig a few up for him.

I also noticed that a portion of his food went to the floor instead of his mouth from those nasty tremors. He struggled getting food on  his plate. I went to the kitchen and asked for a plate guard. I clipped it on my brother’s plate and it made a huge difference. I told the kitchen to please make sure to attach a guard to each meal plate and they said alright.

The sighing and the tears left as he was able to finally get food on his spoon easier. I don’t see him eat with a fork much anymore. I don’t care. He would have more problems with a fork I think.

He was going on an outing today. He and his driver were going to go get his glasses tightened and get a strap for his glasses. They keep rolling down his nose as it is very difficult for Al to look at a level direction. Just for his photo today, I had to help get his head up far enough for him to look at the camera.

All in all we had a nice time. I told him unless we get that big snow storm I would be back on Sunday. Happy Valentine’s Day bud. Your sister loves you bunches.

It’s Valentine’s Day, so write an ode to someone or…

It’s Valentine’s Day, so write an ode to someone or something you love. Bonus points for poetry

O love of my life

Who is my wife

I love you so

And this you know

The day we met

I had to beget

I fell in love

And gave thanks above

You looked at me

And then became we

And then we named

For ever and ever

I have ner regrets

Of our lives as yet

I love you so

And will never let you go

For coming in my life.

I have learned so much

By my friends here…