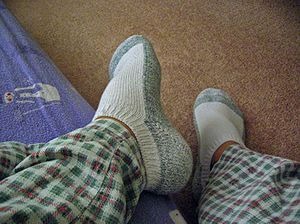 It was a day that started off terrible but ended up calm. I called the facility to see if Alwould…

Today WordPress let me know that I have been with their company for one year. I didn’t actually make my first post until March 6th I believe, I was scared.

In one year I have made more friends than I ever dreamed I could. I have read wonderful and funny and sad stories. I have spoken to a few of my friends over the phone. I have sent and received gifts from bloggers.

One of the biggest days I will forever remember is the days before my brother’s birthday. I sent out an open invitation for you to send him a birthday card or well wishes. You did more than I even thought. Cards, and gifts, phone calls and even writing messages on the Facebook page I made him. I still have that page by the way and his birthday will be coming up in May so I will probably ask for your help once again.

He and I are only one year and a couple of weeks different in ages. His birthday is May 3 and mine is April 21.

I have been so blessed by all of you. I don’t know how I made it before coming to blogging world. It has helped me heal, see things in a different light. I have had helpful advice. Instead of googling something first off, I usually come here for advice first. You have laughed with me and cried and listened to my whining. You have lifted me from sorrow and helped me to cling to my faith.

In this one year I have these stats.

I know that you already know that I have over 1000 likes now.

All these wonderful places to share my stories at is awesome!

Well I better get off of here and think about supper. Thank-you all for sticking with me through my thick and thins………. It was a day that started off terrible but ended up calm. I called the facility to see if Al would like to go out for lunch and he jumped at the chance. I went in and picked him up at noon and the nurse told me to be careful, that Al was in a mood.

Evidently he had been in his wheel chair therapy with his favorite therapist. She was having him do some exercises that hurt his muscles. He was letting her know how he felt about it in a nice loud voice.

The therapist found me and said that Al is so close to never being able to walk again, she is determined to keep him walking just a little bit longer. I knew that Al was struggling but I was also wondering why she was pushing him to walk when we  all could see he could barely do it.

Then she explained further that she was trying to get him to the point where he could stand and try to put his own self in the wheel chair. In other words transfer himself. Then I understood more of what she was talking about. She told me his time is so close to being up for walking, it just made her sick inside and I understood.

I went in to Al’s room and he was definitely in a roaring mood. He was crying and talking so fast I could barely make out what he was saying. The aides knew I was coming so two of them were cleaning the poo from under his nails.

I couldn’t get him settled down no matter what tone of voice I used. It used to always work but not today. I finally told him I could not take him out in public like that. I had to repeat it two more times and finally it clicked. He began to settle down some and the tears slowed.

This just broke my heart. I talked about everything but the nursing home and by the time we hit our favorite food joint the tears were minimal. He ate very well and even had a piece of pie for dessert.

After we left there I took him to Shoe Carnival and bought him a new pair of awesome Nike’s. They are gray with the new bright flourescent green trim. He was so excited. I was jumping up and down inside to see him back to somewhat of the brother I knew.

Then I took him to Wal-Mart and had the beauty shop cut his hair and trim his brows, ears and mustache. He looked awesome! I think he enjoyed it. I bought him an extension cord for the radio I had purchased the other day. It is small but has a nice bright time on it so he can see it through the middle of the night. He wakes up a lot and he likes to know what time it is. It also has a radio on it so he can pick up more than he can on his coca cola portable radio since it is electric.

I bought him some new socks also. I had purchased some about a month ago and would you believe only one pair was in his drawer. Where in the world do these clothes go? I get sick of buying over and over the same things.

I already told you that he is now using medicated powder for his very sweaty feet because the aides are not putting his regular socks on him. They use slipper socks which make his feet sweat worse. Guess what? When I went in today he had slipper socks on.

I got cocky, I know I did, but I have told them three times now not to put those dang slipper socks on with shoes!!! I made them change them before we left. This is why I had to buy him the new shoes. His feet sweat so bad that it pollinated the  interiors of his shoes.

He was exhausted by the time we got back to his room. I plugged in his clock and got it set for the right time and he wanted to lay down. As I was getting ready to leave he looked at me and said, “I’m really trying sis to be good but the pain meds just don’t work good enough. It hurts all the time.”

I told him I understood and cursed the Parkinson’s Disease as I walked out of his room to let him sleep. All the way home I kept asking myself why. Why him why does he have to hurt so bad? How much longer before I can get him out of this place?

I’m getting to the place where I don’t want to be around anyone that is terminally ill. Being with Al is all I can handle. My heart won’t take any more pain from others. I don’t know how in the world I will ever be able to take care of more patients unless I do it through blinders. Do the job, and go home, collect the money and go back…………

Standing on the beach alone

Listening to the ocean call my name

Standing on the beach alone

Listening to the ocean call my name

Looking back to see if someone

Other than myself is standing also

Waves of fingers reach out to me

Motioning for me  to walk forward

Come into the sea I will keep

You safe and I will be your friend

One foot stepping in front of the

Other leaving washed prints  to fade away

Heart beating faster as I

Move closer to the unseen voices

Rippling waters grab at the edges of my dress

Pulling me  along ever so gently

Come with me dear friend I can

Bring you so much more

Comfort and love than you have

Desired so strongly from within

Water touches my waist as

I am  guided  toward  hope and dreams

Knowing no one will ever miss me

The sea smiles and I  realize

Two arms gently pick me  up

Placing my body in strong arms

I  look  into the face

Of someone who cares

That I didn’t really want to die

He walks me ever so gently

Back to the beach and lies

Me gently on the sand

Laying his lips atop of my lips

No pretty lady you will not do this

Today   I have heard your heart

I have come to rescue you my lady

I am your every wish and deepest dreams

Today is the first day you will feel  loved.

God has a way of

I found this out tonight

As I revisited my past