Saturday was a nice calm day for Al and me. I was a little surprised that he didn’t ask for any pain medications, but didn’t push it. Today, I woke him up so he could take his meds and he sat in his lift chair most of the morning. He didn’t even take a nap, like usual.

After lunch it started to change. He started complaining of pain in his side and his neck. He didn’t want to lay down and then it got too late to lay down as the shower girl was to be here at 2pm.

She had a terrible time with him as he was going back to his old ways of being crabby. He couldn’t hold his head up normal and he was so weak he could barely stand. After his shower I put him to bed immediately.

He only slept an hour and was back a wake.  For supper he couldn’t feed himself because he was too weak to hold his spoon and his tremors were a mess. After I got him all cleaned up and had just put him in his lift chair the phone rang. It was the beautician ready to come cut Al’s hair.

I knew it was shitty timing but getting her to come out on her days she did work was too hard. She came out and gave him a cut. She is good and she was quick. After paying her and she left I wanted to put Al in bed to watch TV but he insisted on his lift chair.

He then argued with me because he wants his bed side table full of cars. I offered to exchange cars but he wanted his way. I couldn’t give in. We need the space for his glasses at night, his remotes, light, bell, and he already has three cars sitting there.

He started crying trying to get his way, then he got mad. I sit here now thinking he has complained of neck pain and side pain. He is dead tired. His body is too weak to even help himself stand all because he turned down the pain medications.

I think he should have them anyways. It keeps everything under control. It helps stop the pain before it gets out of hand. It helps him to not get so upset and fussy. Now I have a brother who is refusing to lay down until bedtime and is at his worst.

I think he is trying to prove to himself that he doesn’t have his illness now that he is home, but he is wrong. We talked for quite a while and he said, “This illness is going to take my life. It is going to kill me.”

I hated it but I said, “You are probably right. This illness will get no better. It is going to make you weaker and eventually you may not be able to get out of bed. You need more rest so your body can sit up and eat. You need to take your pain medications so you don’t get to this point.”

He started crying and I had nothing else to say as I didn’t want to start the arguing again like last time he was here, so I left the room and got on the computer. Should I have ignored his saying no to pain medications or given him the pain medications anyways?

Here are some photos I snapped today in our home. 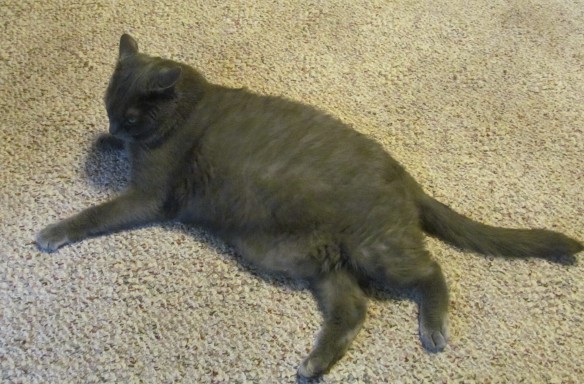 Things at B’s house became more fragile, the longer Dad was sick. The more time that went by the more he wanted me to be his caregiver exclusively. I would be at work and I would receive calls night and day.

Thankfully, I worked for a wonderful family. I…

Things at B’s house became more fragile, the longer Dad was sick. The more time that went by the more he wanted me to be his caregiver exclusively. I would be at work and I would receive calls night and day.

Thankfully, I worked for a wonderful family. I had actually known the kids way back when I was a teen. I had run around with one of the daughters. Even if the call came through the  night, I would call my boss and let her know. She would say, “go ahead Terry, run over to him and then come back as soon as possible.” I was running three different lives as caregiver all at once, but I did it. Anytime Dad called, I was there.

By this time the half-sister and Al were completely out of the picture. Al has a routine he follows. It is part of his mentality. As long as he doesn’t have to part from this, he is alright. He went to work. He worked at a linen company and worked from 10am to sometimes 7 or 8pm. It was sort of crappy hours but he didn’t say much. He would come home and eat one of his frozen chicken patties and I don’t know what else. He watched TV and then went to bed at 11pm  each and every night.

I would call and check on him but still not allowed to actually go in the family house. It was one of those situations I was forced to look at as a fight or flight. I thought, as long as I know he is alright, I will let things rest, while I take care of my husband and wife team and Dad.

When I would go into B’s house either to play cards with Dad or be his caregiver, I was always met at the back door by her or the dog. As soon as I stepped into the kitchen she would start in on me.

“I am just so damn pissed that I am with a dying man. Do you know what we did when my own husband was dying? We all got a beer and gave him a beer and we would sing around his bed and get drunk.”

I just looked at her in awe. I couldn’t imagine this but of course I was not and still am not a drinker. I have seen the damage alcohol can do to people. Don’t get me wrong, I am not here to criticize, but in my opinion, I want to know the stupid mistakes I make in life.

I never said anything about her remark and let her proceed to belittle me all for the sake of Dad. She would show me the cupboard full of medications and express how Dad was taking up her kitchen space.

She would show me the partial bottles that I needed to call the doctor on or go have refilled. She would show me her refrigerator and tell me how many dollars she spent on Dad just trying to keep in here what he wanted to eat.

She said she was on a limited income and could not afford to give him whatever without the fear of going broke. From then on I would call Dad on my way over and ask what he was in the mood for to eat, then I would go get it.

As he became weaker he always wanted egg-drop soup from the Chinese Restaurant. That got to be about the only thing he would eat, but it was alright. He would have me feed it to him and we chatted and gave each other eyes for words.

B got bolder as time passed by. She would begin to tell me about their sex life. I hate to tell you this, but I wasn’t interested in Dad and her sex life. For heaven’s sakes, this is my father we are talking about.

After while I wasn’t even sure if she was telling the truth, as Dad couldn’t make it up her stair case anymore, and if she did get him there, she pushed him all the way up the stairs. I was just standing by, holding my breath, waiting for him to fall backwards and topple on her and they both would come crashing down, but it never happened.

Then she began to tell me what a disappointment I was to my Dad. I heard things I had never even questioned in my own heart that I had done to hurt him. I knew that I had disappointed him in some ways. We always want more for our kids than we had and maybe I didn’t produce all he wanted, but I loved him and accepted him for all his faults. He was my hero, I had always placed him high on a pedestal. I don’t feel this way any longer after caring for Al.

She would tell me bad things about Al and the sister. She would complain about my Mom. This used to make me royally pissed. She never even knew our Mom. Mom had died seven years prior. I wanted to tell her off so bad but alas, I couldn’t. I wanted her to be out of the picture. How I thought she was so nice and pretty in the beginning is beyond my own imagination, for I now looked at her as the wicked witch of the west.

One time when I was at work she called me around 1am and told me, “your Dad is wet. If you want him dry you better get your ass over here. I am not changing some sick man.”

I would get up out of bed and make sure my people I was in charge of were alright and then sneak off to the five-mile trip to her house to change him. I would not see her when I arrived. She would leave the back porch light on and the door unlocked. I used to think, why hasn’t someone broke in here and kidnapped the old hag?

After cleaning him up I would race back over to the house I resided in on the weekends. After work ended I would run by Dad’s house and make sure Al’s car was gone. Relieved, I would head home to try to live some sort of life.