I didn’t realize the damage it was doing to me. Trying so hard to make others happy. I can’t do it, at least not every time. I didn’t feel or see what emotional draining I was experiencing until I had written the final post, claiming Al‘s wish is now dead.

After I finished, I began to shiver and then I started shaking. The tears rolled and I just felt weak all over. I instantly went to the couch and laid down but my mind was arguing with each side of my brain.

It finally dawned on me I am exhausted. Not only from learning I could not fulfill Al’s wish, but the shower gal who has been coming up and quit with no notice. Discussions with the transportation center, Hospice, and myself started immediately.

I have had to give Al his shower already this week. It isn’t that I can’t do it. It is just I am too tired to add one more chore to his list. I know you can call me wimpy or a whiner. It’s alright.

Rolling him over on his side when he naps or lays down for the night takes three big tugs because I am just too darn old and have less muscle than I used to. So physical and emotional is taking a toll. Yet I remember God won’t give me anything I can’t handle. I keep telling myself this on days like today.

Things were worked out for Al’s showers but don’t start until next Monday. He will go in a bit later M-W-F and come home the same time. The new shower girl will be here at 9am on those days.

But for now I have to give him his shower tonight and Friday night.

I laid there on the couch for a while and then the tears dried up. I got up and did something I end up doing about twice a year. I went shopping. I just had to get out of here for a while. I keep in mind when I am out what I can afford to pay when the next month’s bills come in, and I am a clearance shopper on most items.

So I went to Taco Bell and got some lunch. Al hates that place so going there is a treat for me. Then I went to the Beauty Shop and then I went to my favorite jewelry store to check out big sale items.

I lucked out. There was a special running at the Beauty Shop and a big sale going on at the Jewelry Store. This is what I did to my hair and this is what I bought to wear.

For which he wants me to walk

I try to hurry up

I think I’m running a race

But then my body says

Hey you are moving too fast

Take a break, sit a spell

Breath deep and re-learn to laugh 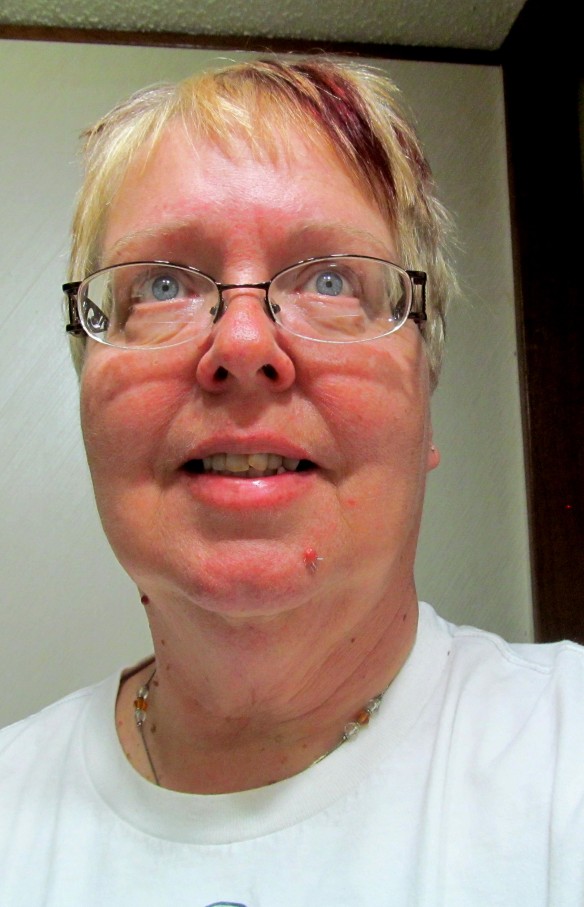