We waited until dusk fell. Both of us had been trying for ever to be together; but everyone and anything got in our way. A friend of ours told us about this old cemetery, so we decided to check it out the next day.

Upon arriving, we both sat, frozen, staring past the trees, into the shaded cement monsters, that spelled fear and creepy. Our breathing slowed, and the hair began to rise on each of our arms.

This was our chance though. Should we let a little cold shiver scare us from our goal? We loved each other so much. We were both 16 years old. We fell madly in love at the first of the school year, in Biology class. We walked into the door at the same time, and our eyes locked. We were smitten from that moment on.

Here is is, October 30th,  2009. Hadn’t we both waited long enough? Billy had kept asking me if I was sure I really loved him. I swore I did, but he always went back to the same, smug comment, ” how comes you can’t show me”.

We would sit out front of my house after school in his 1999 Ford truck. Mom didn’t get home until around 5:15, so this gave us plenty of time to talk and whatever else we felt like doing.

Billy would start kissing me. He would put red marks on my neck that sent me through the roof. In no time at all, I would feel his hand sliding up under my shirt. I didn’t try to stop him. Why should, I ? It felt so good. When his hand tried slipping under my skirt, I shunned away, and this is when he would make those nasty comments, trying to get me to go further sexually.

The truth is, I was afraid. I was a virgin, and I always had heard from my friends that I was going to be in a lot of pain, and I may make a mess. I didn’t want to do that to his truck, but I think I was a little afraid too.

We both sat here, staring ahead, and Billy reached over and began kissing me again. Before it went to the next step; I stopped him. He shook his head and turned away from me, staring out his window.

” It’s not what you think Billy. I do want you. I just want to do it right. Let’s come here tomorrow night. Halloween night, what better timing then to dive in to something brand new. Hey! maybe we will even wake the dead up?”

Billy looked at me and slowly smiled. He was thinking, finally, I get to know what all the other guys are talking about, first hand. He took me in his arms and we necked a little longer. Once again I stopped him and he quit.

He turned the ignition over and we both agreed on 9:00 pm, the next night. We went back to my house and we went our separate ways; anxiously awaiting what was coming tomorrow.

The next evening I heard the horn and I yelled at my mom, ” got a date mom, be back before midnight.” She waved a hand and went back to her TV show. I ran out to where  Billy was waiting for me. Getting in the truck, we didn’t talk too much. I think both of us were a little nervous.

We arrived at the place, and things looked even more creepy than they did yesterday during daylight. I jumped a little and Billy caught me in  his arms. He motioned for me to get out. I did what he said. He got out and reached in the bed of the truck and grabbed a blanket and hand in hand we walked over to the biggest tree.

He spread the blanket out and we laid down. Suddenly timidness took over and we both stared up at the naked branches. I swear it looked like big hands waiting to swoop down around us.

Billy could wait no longer. He rolled over on his side and he pulled me near him. He started kissing me and then he did that thing to my neck again. Anything about the trees and creepy things left my mind as I was so into this guy I loved.

He took off my shirt and touched places that had been forbidden before. He sent shivers down my spine and I snuggled closer to him. It wasn’t long before he was taking off my pants and panties.

I had never felt these feelings before. This must be what love is really like. He asked me to do things to him that I thought were so gross, but because I loved him, I gave in. He began to get on top of me, when a curdling scream came out of his mouth.

It was so dark and yet I could see shadows. The arms of the tree were actually picking him up. After rising him to the thickest part of the trunk, the branches shoved him so hard into the bark, his face was implanted in the tree.

I screamed with all I had; but no one heard me. I stood up and dressed. I tripped over myself trying to put my socks back on. Picking myself up, I reached down and tried to find Billy’s keys. I couldn’t feel them anywhere.

I grabbed the blanket and began to run as fast as I could. I was breathing so hard, I began to feel light-headed; but I had to get out of here. I had to get help. ” Someone, someone, please help me!”

It was at that moment that a dark shadow appeared in front of me. Next to it were tiny, little, midget like forms that looked like people. I froze in my spot. I couldn’t move. I wanted to run, but couldn’t.

Then a soft-spoken voice was speaking. I couldn’t quite make out what it or who was saying  it. The shadows came closer and leaned into me, I swear I could feel their coldness. Speaking again, I  heard, ” Go home, go home. It isn’t your time yet. He isn’t the right one for you. We are here to protect you, now go home, and be patient.” My body suddenly let go, and I ran as fast as I could. I didn’t bother trying to find the keys again. In fact, I didn’t bother with anything. I ran all the way home and through the front door.

Mom yelled out, ” did you have a good time tonight, honey?”

“Ya mom, sure did, but I am so tired. Talk to you in the morning.” She went to her room and closed the door behind her. She didn’t take her clothes off. Instead she took her shoes off and hid them under her bed. She crawled under the covers and closed her eyes.

I don’t know who it was I spoke to. I don’t know how those trees did what they did; but I do know I was scared shitless. I never brought this topic  up to anyone and I never went back to that spot where I almost lost it all. 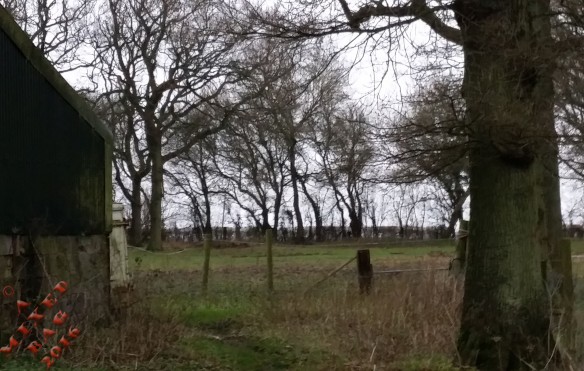