Write A Story As A News Report

I was going to write about the latest school shooting; but I already blogged about it on my other blog, Terry1954@wordpress.com

I am standing at the corner of Center and Main. Hi, My name is Terry Shepherd and I am reporting on the biggest day ever in our lives about the return of Jesus Christ.  The clouds had been lingering all morning, but in the last two hours sunshine has brightened our mood and opened all eyes, no matter where you stand.

Commotion has been swirling as a mighty tornado in this small, ancient city of Jerusalem. People have been lining up on the streets here for days. The news has been broadcasting the latest trend that, Jesus is coming back at 1pm today.

We have about fifteen minutes before 1 and the noise has started to settle. Cameras are going off, children are hopping on the backs of moms and dads. Everyone is standing, shading their eyes, looking to the skies.

Five more minutes. I look around the crowds and try to see the end; but there is no end in sight. I have never been a witness to this kind of event, but I can tell you that even I have goose bumps.

News has jumped softly on this topic for so many years but no one really knows if, wait, wait, listen everyone. Look, up there! In the sky! Is it? Could it be? Oh my God, oh my God. People know we are witnessing for the very first time. Yes, there he is.

Everyone is getting down on bended knees. I can hear prayers being said. I’m sorry folks, I am going to lay my mic down. This is a moment that only each of us can take in, in our own way. Just keep watching the camera.

The word for today is; awkward

I wonder how the kid feels about taking those ten lives.

Like others who’ve terrorized American students, the 17-year-old planned to kill his peers and then himself, the authorities said.

He opened fire, and the school erupted in chaos. An alarm clanged, and in the art room, bloodied students cried for help.

But once the bullets pierced his classmates’ bodies, the suspect surrendered, said Gov. Greg Abbott of Texas, and admitted “that he didn’t have the courage to commit the suicide.”

On Friday, as a small Texas town grappled with the deaths of 10 of their own, a sketchy profile of another violent young man came to the fore, the disturbing details of his life blurring with those of the school gunmen of the past.

“Born to Kill” appeared on a T-shirt he posted on his Facebook page, along with images of the trench coat and an explanation of its decorations.

The family of 17-year-old Pagourtzis, accused of killing 10 people and wounding 13 others at the Texas high school Friday, issued a statement expressing condolences to the victims.
The family members said they are “as shocked and confused as anyone by these events that occurred.”
Pagourtzis is a “smart, quiet, sweet boy,” they said.
The statement, issued through a law firm, says the family is cooperating with investigators and will make no other public comments until the fact-finding stage is completed.
“While we remain mostly in the dark about the specifics of yesterday’s tragedy, what we have learned from media reports seems incompatible with the boy we love,” they said.
Pagourtzis is being held without bail and is accused of capital murder of multiple people and aggravated assault on a public servant. He has not entered a plea.
Robert Barfield, the attorney for Pagourtzis, said his client is “not doing well” and is “confused.”
The suspect won’t face the death penalty if he is convicted. Under Texas law, offenders who are under age 18 and charged with a capital offense face a maximum punishment of life in prison with the possibility of parole after 40 years, according to Robert Dunham of the Death Penalty Information Center.
Suspected killer, 17 years old.

Do you think he feels awkward after the fact? Did he feel awkward when he planned and plotted this killing scheme?

My worlds have collided. This Krispie Treat Fudge is the best of both fudge and gooey marshmallow treats! 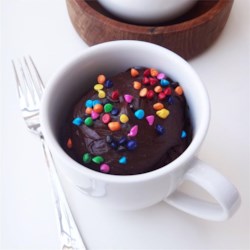 Recipe By:Sarah
“I created this recipe for a somewhat healthier version of an easy Nutella(R) mug cake so I wouldn’t use so much Nutella(R). Let it rest for 2 to 4 minutes after cooking, but enjoy it warm.”