She was the ugly duckling. He was the jock. She was in the cheer block. He played

football. She had stars in her eyes. He had dollars in his. She wanted to fall in love. He wanted a scholarship.

One time before game time she got in a tiff with her parents. That same day he decided to score with his gal. The game was good. Excitement, cheers and streamers. After the game she remained behind. He went into the locker room.

She climbed high on the bleachers. He high-fived and showered. She bled tears in her hands. He came out with his girl on his arm. She heard murmurs below. He was getting too  fresh.

She heard a slap on the face. He told her to get back here. She watched the girl run. He ran towards her than quit. She watched in silence. He kicked the bleachers.

She coughed without reason. He looked up in her direction. She watched as if she’d been caught. He stepped up one by one.

She turned in his direction. He sat down beside her. She sat catching her breath. He bowed his head in silence. She touched his arm with her hand. He looked up at her face.

Tears streaming from her eyes. Weeping took over him. She said, “It’s alright.”  He dropped his head in her lap.

She caressed his hair. He wept harder.

Each from worlds apart

Meeting and healing the heart.

Saturday I took Al to see the fireworks here in town. I try to find the little things in life to occupy Al’s mind, but it is seemingly getting harder to know whether he is enjoying our activities or not. His body is sometimes bent so forward, that it is hard to see his face.  To me, I notice, that this Parkinson’s takes a hold of the body and twist the breath out of the lungs, and forces the body to double over, trying to regain what has been taken away.

We sat on the bleachers, with Al sitting on the third one from the bottom. After watching the fireworks, it was time to leave, and Al just sat there. I could see the fight coming from within him as he tried getting his legs to move. He top half of his body was moving, trying to turn to the side, to step off of the bleachers, but nothing on the bottom half was inching.

He started crying and his face was getting red from being humiliated, and working so hard. I walked over to him and helped him move, but at first, even my help didn’t do anything for him.

I was guilty at first, when Al started having these freezing moments, to just step in,  like I did when I was working in the nursing homes. I would take over the physical actions of the other person, and make the body move for them, but with Al, I have seen the frustrations of not being able to do things for himself, so I smack my legs with my brain thoughts, and stay back, giving him a chance to do things for himself.

Here I have posted some photo shots of the fireworks we both saw. They are not the best, because they are night-time photos, but I hope you will still enjoy them. 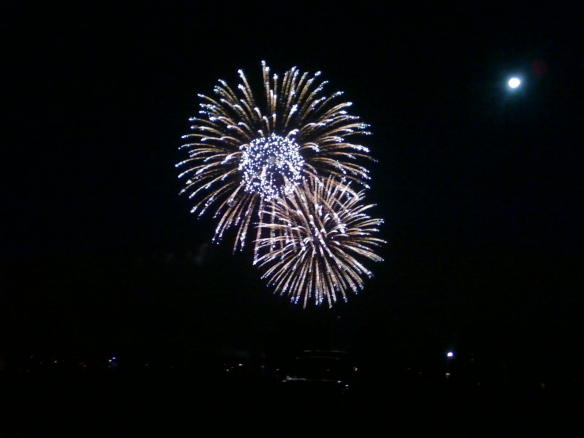