Why is it almost every single time, my heart is squeezed when I leave Al at the facility. I tell him I love him, and my eyes instantly start to water. I hate the gut wrenching pain I carry with me as I exit the building.

Tonight was no better. The facility had a Christmas party for everyone. I arrived to see a sad man. He pulled out a card he had received in the mail today and then started to cry. Then he started swearing. I thought, wow, who could have sent him a card that would make him this upset? I had already done the dirty work Al had asked of me. I had told the people that they should leave him alone, so what is this all about?

He gave me the card and I opened it. I will be full of crap and shoved in it! It was from the aunt who causes Al so much grief. Although it was signed in our loving grandmother’s handwriting, the card was sent from the aunt. I hate to blame anyone for anything, but this woman ruined Al’s day and party. I just wish she would butt out! If you are out there, and you or one of your friend are reading this, please leave him alone!!You are making him suffer even worse than the PD!!

I did convince him to go to the party. I told him all of his friends would be there. He did go. We sat with some of his friends and I had the opportunity to meet some lovely people, that new our mother when she was growing up.

The song leader  lead a chorus of Christmas carols and then there were foods to be nibbled on and Santa even delivered each of the residents a gift. Al didn’t want to open his because he was just not in a jolly mood, so he had me open it and then I had him take it out of the package. He asked me to bring it home, which I did. It was a nice fuzzy blanket throw.

After the party was over, Al got up to leave the table and his legs froze right there on the spot. I think he was humiliated and he started to cry all over again. My poor brother, I love him so much. I just wish anything or anyone that would cause sadness in his life would just disappear. I wish I could fix everything. I wish I could blink a way the nasty Parkinson’s Disease. I wish we could go back to six years ago, when all was fine.

I did my best to look cheery, and talk about nothing important. I did get these photos. I am thankful to the lady who took Al and my picture together. I wish I would have taken off my coat though. I look fifty pounds heavier in it!!! LOL 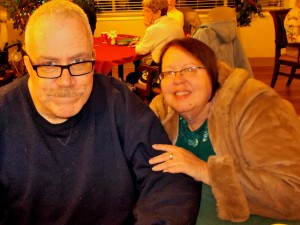