Well, I met Alat the bus and as I was pushing him up the ramp, I told him I had a… 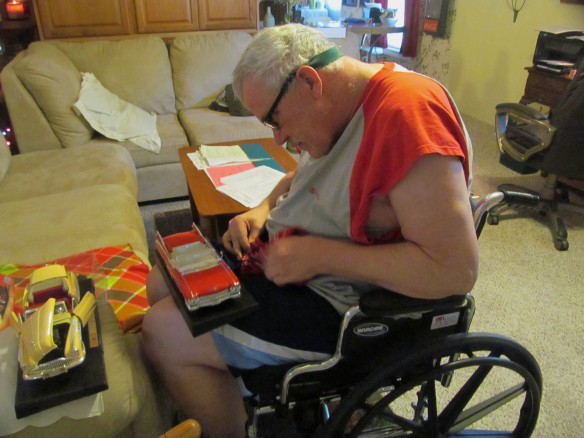 Well, I met Al at the bus and as I was pushing him up the ramp, I told him I had a big surprise for him. He didn’t say anything.

I got him inside and pushed him up to the waiting cars. He said,”Wow, are these for me?” I said yes and I know I was dancing like little pigs  and I was smiling from ear to ear.

He looked at them but didn’t touch any. I talked to him about them but he said nothing. I asked him if I could take his picture holding one and he said yes. I placed one in his hand and snapped the two photos above.

That was it, it was over, all done with , dance gone. I guess I am in denial. I expected  the old Al. I want to pretend somewhere deep in my mind that he really isn’t that sick. He is just a little sick.

I thought I was adjusted, but I guess not. Al liked the cars, I am sure of it, but me, I crumbled inside because he wasn’t dancing that pig dance with me. There were no big grins or laughter, no spark in his eye. I asked him three times before I got that smile you see, and as soon as the snap was done, the smile left.

I pushed him to the new clock and he looked at it. He asked a couple of questions and then it was gone too.

I wanted to sit down and cry. I want my old Al back. I want to hear the chatter and the laughter again. I pushed him up to the table and he waited for his supper. I gave him Kiwi for the first time. He hesitated but he did eat it. I think he could take it or leave it. I had a pork chop and he is refusing meats unless they are mushy. He also doesn’t want me to puree them either. He says they look funny.

So he had a hot dog cut up with ketchup, mashed potatoes, cut-up tomatoes, and hominy. He ate the hominy, tomatoes and kiwi because he could use his fingers. He ate two bites of mashed potatoes but since he had to use silver ware, he gave up because he was too weak to use the utensils.

I was reading the Hospice book today on signs of someone in their last six months. I hated it so much that I recognized a few of Al in the symptoms. Al used to drink a lot, but anymore he drinks less than half of what I pour. His appetite is definitely down, which the book said thirst and appetite decline as the body does. It also said not to force them or to shame them if they don’t eat well.

After supper I asked him, “Do you want to go back over to the couch and play with your cars?”

Well that was that. Somehow I have got to get my mind in the right setting because I am sitting here licking my wounds expecting more but receiving less.

I guess I will look at the positive in this. He is here with me at home. He ate and drank some. He did the smile for the camera. He waved at me when he saw me from the bus when they were letting him down on the lift.