Hanging On To You

Hi bloggers. I am writing to each of you that respond to me, all in one blog reading.

I don’t feel well today. I don’t normally make it an plan of action  to…

This writing exercise is brought to me by

She wanted to read her…

Hi bloggers. I am writing to each of you that respond to me, all in one blog reading.

I don’t feel well today. I don’t normally make it an plan of action  to write this many blogs in so few hours, but I need your friendship at this moment.

Good news. I have hired a respite caregiver. Her name is Shannon. I fell in love with Shannon as soon as she arrived here. She went straight to Al’s room and interacted with him, while he showed her all of his coca cola items. I could hear her making a fuss over each one as if she had never seen anything like it in her life. She left him to talk to me for a while. She said she was going through the ads,but before she started reading them, she prayed, that God would show and guide her to someone who needed her. The way she feels about life, and her complete attitude had won me over. Al liked her also, a good thing. She is going to be able to let me out of here once a week, and once a month I get a whole day, like eight hours.

The heating and air man came today because of an issue I was having. Not much wrong, but still the bill was pricey, as everything in the world is. Next my son called me and told me the price of the shingles for my roof was double what I was quoted.

After we hung up I called the store and they had only quoted me for half a roof. They forgot to times it by two, so my mind went into shock, as I knew I had no choice, as the old roof was torn off yesterday. He has left to pick up the shingles and other supplies, and Al is taking his nap, so the only thing I hear is silence.

I should be grateful, but I am not. I have this huge butterfly nest in my stomach, and my heart is hurting terribly. Not like a heart attack, but like a I am alone, and I am scared, and I am fidgety. The pain in my heart is from all the stress that has been building up for months. Agitated that I can find no comfort in anyone around me. irritated that it has taken so long to find a caregiver that actually wants to help me. Battling with my own edges of depression, fighting hard to keep my sanity. Leaning on God for anything I can grab a hold of. I feel like I am going to snap. My eyes feel like they are going to flood, but nothing happens. I feel helpless, not hopeless, but helpless. My age and diabetic issues keep me going backwards, forcing me into reality that I can no longer do the things I once used to do. That with age comes weakness of the body. I hate asking for anything in life.

I feel guilty because I feel bad. I have just found the perfect caregiver, and I know God has put the two of us together, but I still feel sick.

I don’t understand why I am the way I am. Trust in the Lord. Give him all of your worries, do not lean on anyone here on earth. God will take care of me and everything that I need he will be here for me. So why do I want to just lie down and cry my eyes out. Why is my heart acting like my brother is already gone, when he is sleeping in his own bed.

Is something catching up with me? Has something been following me for sometime and I am just now realizing it?

I went to my friend Aina’s blog, link above here, and I instantly felt more pain, but I forced myself to listen to her song she had on there. She was telling me about her two-hour walk, and the restaurant that she, herself, had picked out. She chose her own meal, and listened to the live band play. As I listened to the songs, and followed the words in them, utter loneliness crept inside my soul and heart. I wanted this. I wanted this so bad, I could almost taste it. I wanted to be around those people, listen to that music, eat my dinner with calmness.

I am where I am because this is where God hath placed me. I am doing the Lord’s work as he as asked me. Why can’t I be content. I need to stop! I need to think of others over myself. I have a job to do and a soul to look after. I am disgusted that I can possibly want more.

It has helped somewhat to write again my feelings, but the heart is still aching. The loneliness will turn into loud noises once the family is back. I can once again put all of this behind me and save it for another day. Does the mind have a way of protecting itself

Can we place our hurt on hold

Can we freeze words we have heard

So our hearts  don’t feel so cold?

Can we close our ears to the world

Can we shut our eyes from the pain 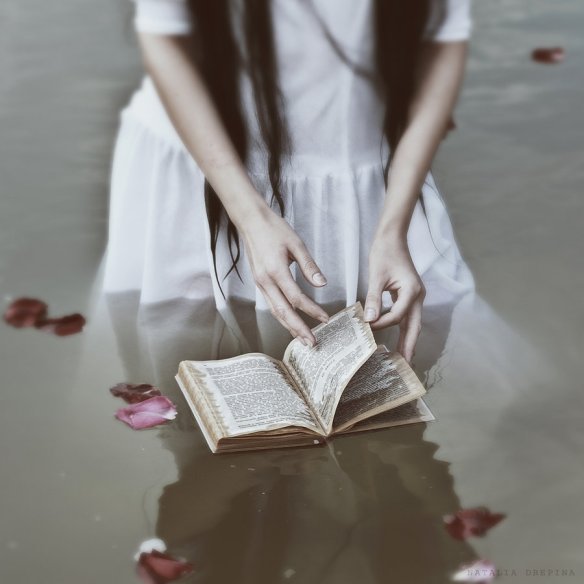 This writing exercise is brought to me by

She wanted to read her reflections in the exact same spot on the day she was baptized here in the waters.

Her life changing, having given it to God. She had been an  unneeded child, and in her late teens had left from home. She made her way in life by working in restaurants as a waitress and than a cook .

Her parents were too young when they had Julie. Her mother worked in a small factory, in a town ten miles from home, and her father worked in the mines on the outskirts of town. They didn’t have the desire for a child. They could barely keep food on their table, and having another mouth to feed just made their own lives harder.

Her mother would come home from her job and expect some type of supper food on the table. Julie’s parents didn’t have too much money, so choices for meal preparations were to be desired, but Julie used her imagination and managed to have something ready for her mother when she arrived home.

Julie’s father worked long and hard hours, so she didn’t see him often. He took his lunch box with him and usually stopped at the local tavern on his way home for a bite to eat.

Julie had plenty of time to dream about her life while she was at home. Her parents had sent her to public schools for her elementary days but as the prices got higher for the upper school years, they made her drop out and told her she could learn more living life than hearing about it at school.

Julie kept the house up, doing laundry, dishes, sweeping. She cleaned windows, and swept the small porch on the front of their house.

When you looked out from the porch, you could see the mines in the distance where her father worked. Sometimes when you were sitting out there you could hear large booms and vibrations from where new areas were being opened in the mines.

Julie loved her imagination. She could dream about new recipes, and from her own garden could create new flavors from her herbs she was growing.

When she reached seventeen years old, she packed all of her personal belongings, and wrote a letter to her parents telling them it was time for her to find a better life, and that she loved them. She left it on the kitchen table for mother to read when she got home. Julie also left a dinner plate in the oven for her mother’s supper.

She left and didn’t go back for years. She hitched a ride with a passer-by and landed herself in two cities over. This was a large city and she knew that she would have plenty of growth opportunities.

Immediately she landed a job at a restaurant as a waitress, and had also saved enough money for a room to rent. She loved her job and it wasn’t long at all that she had plenty of followers that came to see her and have her wait on them.

Her life was doing well and she thought of her parents often, and hoped they were doing well. She had plenty of people she knew but she missed having someone in her life, but that all changed the day he walked in the front door of her work place. He was handsome, not dressed to fancy. He talked with a mild manner, but his eyes are what drew her to him. They were the bluest of blue she had ever seen. He looked at her and placed himself in her section. Each day this pattern was continued.

One day he asked her out for supper, and she accepted. Their love blossomed and soon they knew their eyes were for each other only.

Julie stayed at the restaurant and worked her way up to cook, then main cook. The restaurant grew each month from her using her experiences with foods, adding herbs and new flavors.

After a year went by, Julie and her boyfriend decided they wanted to spend the rest of their days together. They wanted to share their love with all of their friends and have God witness their union.

They went to the lake on a beautiful Saturday afternoon, and with all of their guests surrounding them, they were pronounced man and wife. After the kiss was performed, the minister took them one by one and they stepped out into the water and they were baptized. Now they were starting a new life together with each other and God.

Today marks one year from the date they were married to each other and God. Julie returned to the waters, to the same spot where she was united, and with her bible she gave thanks to God for all of their blessings he had given them both.

Does the mind have a way of protecting itself

Can we place our hurt on hold

Can we freeze words we have heard

So our hearts  don’t feel so cold?

Can we close our ears to the world

Can we shut our eyes from the pain

Can we pretend we feel nothing

Can we say we want nothing to gain?

Can I ask for no news for one day

Can blinders be placed around the  heart

Can I pretend that it is yesterday

When nothing tore us apart?

I want to live this one day

Back when we were innocent and young

When playing with a doll or a truck

And Jesus Loves Me Was Sung.